1   The Maori Land Court procedure under “The Maori Land Act, 1931,” legalises Maori adoptions (whangai) of children of Maori descent. There is thus conferred on such children all rights of succession to their fosterparents in lands and personality. Children not so legally adopted may be granted succession only with the assent of those entitled to succession.
2   Vide table below—“A.”
3   Kahupeka's people, though she was still an infant were, according to Maori custom, acting on her behalf. Therefore they rightfully destroyed the improvements effected by them on the land. Their motive was not an act of malicious intent, but to prevent the fruits of their labours passing into the hands of other people. Vide table below—“B.”
4   Tomo wahine: To claim possession of a woman by virtue of an ohaki bestowing her as a wife for one of their people. This differs from a tono wahine, the asking for a woman without any prior right by ohaki.
5   Ahi-komau (a slumbering fire). A fire left by a people in their kauta (cooking-house) on their departure on a journey or temporary absence. This ahi saved the trouble of rekindling the fire on their return by the hika-ahi or kaunoti process. This ahi-komau also precluded the taunt of casual visitors that they found the kauta fires cold (matau), but actually burning (ahika). To ensure the condition of komau a dry log of kowhai or mahoe was left on the hearth (taku-ahi) and covered over with ashes. It could be speedily relit by removing the covering ashes and fanning with a flapper or fan (piupiu ahi). The human breath might not be so used. Relatives arriving in the interim might rekindle the fire, but strangers might not. An ahi-komau might be left for weeks or more and was an indication to visitors that the local residents were away only temporarily. The process of ahi-komau was also used in tree-felling and hollowing out canoes.
6   Kapiti: Te Rauparaha, having fixed his headquarters on Kapiti Island, from there conducted his campaigns of conquest on the adjacent mainland districts from Horowhenua to Cook Strait (Raukawa). Hence this area of country became known generally as Kapiti. (Vide Maori Place-names. Andersen, p. 245.)
7   Heretaunga: A general name applied to Hutt Valley.
8   Mate uri kore (to die without issue): If an adopted child should die childless the land and personality rights possessed by virtue of an ohaki would then revert to the next-of-kin of the original donor (kai-tuku).
9   Te tamaiti a te tangatake: (The child of other people, i.e., a child of immediate blood relationship.) Such a child and his issue if any were not accepted as incorporated within the tribe. They were regarded as a tau-uri (people settled) within the tribal community as the effect of a former ohaki. If the direct issue of the original adopted person all died out, that became a whare-ngaro (extinct house); or if they left the land, their “hearth stone had fled” (ahi pu-tore). Their rights ceased under the ohaki.
10   Pa-tuna: Because of the perennial value as a sure source of food supply these pa-tuna were of great economic importance. Hence the bestowal of the care and management (manaaki-tanga) by virtue of an ohaki gave the donee much prestige with his adopted tribe. Only he could exercise the fishing rights to such a pa-tuna or give assent to others to so do, and only to those within the tribal group.
11   Uru-karaka (karaka grove): Also known as a pa-karaka (karaka hedge). Like the pa-tuna valued because of the annual crop of berries (whatu-kope), a highly esteemed food supply. When Turi arrived from Polynesia in the Aotea canoe he planted at Patea seeds of the karaka said to have been gathered at Kermadec Islands (Rangitahua). [Vide Aotea, p. 159. Hammond.] Throughout New Zealand there are such groves of karaka said to have similarly been planted in ancient days, which constitute visible evidence (tuhu) of tribal rights to such localities.
12   Rakau ahere (snaring trees): Trees to which various birds specially flock seasonally to eat of the berries, etc. On such trees snares were set. They belonged to special families by ancestral right or to a tamaiti whangai and his issue by ohaki.
13   Mahinga-kai (food cultivation): The ancestral rights to such a cultivation belonging to a particular family by ohaki or otherwise gave such owners much mana (prestige) within the tribe. No outsiders might there cultivate.
14   “Kaore he whenua mona . . . Ko te take, kaore hoki he whenua o te tangata kotahi; no te katoa nga whenua.” (“There is no land for him . . . for the reason indeed the land belongs to one person; to all (the tribe) belongs the land.”) It was the Crown's disregard of this axiomatic Maori tikanga (rule) as to Maori land ownership that led to the Taranaki War. The sale by Te Hira of the Waitara land and Te Rangitake's firm objection thereto were the main factors which led to the subsequent hostilities and the disastrous consequences of the Taranaki War.
15   Vide also White. Vol. 5, pp. 207 et seq. 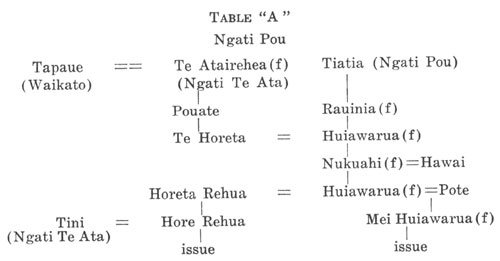